On Not Listening to the Mockers 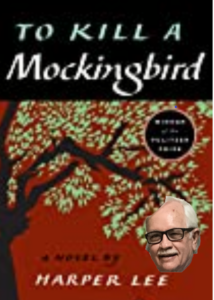 When I was conceived* I was given an historic name from a novel that evolved into an Academy Award winning movie my mom thought splendid.  I have never regretted that she did.

But living up to Atticus Finch is not easy.  His famed creator, Harper Lee, represented Atticus's integrity so beautifully and well, I find it next to impossible to measure up by comparison, which is not to claim in any way that I bear a physical resemblance to Gregory Peck.  Such a flagrant untruth no lie can hide.

I do wish to stress, however, my heartfelt desire to stand for truth in the manner of Ms. Lee's hero, as a white Southerner doing what he can to advance race relations in the USA.

Race, slavery that is, has been a profoundly troublesome issue in America ever since the pilgrims arrived, when the first slaves were brought to our eastern shores by the English in 1619.

Four hundred years later we struggle mightily with slavery's after effects, as clearly demonstrated by the massive Black Lives Matter demonstrations we have witnessed on our downtown city streets nationwide during the pandemic of 2020.

Clearly, too, the 2020 presidential campaign is being bitterly fought along racial lines, with one side, Trump's, defending White dominance , and the other, Biden and company,, challenging it, in spite of the Democrats having to cope with acts of discrimination within their own ranks.

For me the fundamental battle being fought is about racism.  It has to do with the entirety of our racist history that led up to the present, including that surrounding  the Civil War and every bit of our history since, through the  regressively awful Jim Crow laws, the assassination of Martin Luther King, Jr  and on up to the extremely divisive polarizations of 2020.

How are we to win this battle for all Americans?  That is the key question we ought  not allow to leave our minds for a moment.  Racists have in our most recent three plus years played  key roles in Washington DC, politics, grievously weakening both old and recent laws enacted to enhance the rights of Blacks, other minorities and women in the work place.

There's no doubt to reflective and historically connected minds:  race relations in America during the Trump administration have taken giant steps backwards.

The best way to get our race relations back on track is , I firmly believe, through education, quality public education in particular, where we perhaps have been floundering the most.

Due in large measure to our "educated" weaknesses, today's uncompromising racists—White Supremacists, Neo-Nazis, KKKers, etc.—in their growing up they failed to assimilate, in their families of origin or in their formal schooling, the essential historical lessons about slavery and its consequences along with their failure to develop a mature understanding of the organizations and ideologies to which Jim Crow laws and isolationist movements have been and are still inseparably connected.

Like the birds mocking, hard core racists have mimicked their elders, one generation after another.

Destructive church-relations have also played a major role in instilling and extending racial hatred into the present.  Large segments of American Christianity did not just tolerate slavery, they upheld it, and fought to keep it.  These pseudo-Christians have continued to infect their flocks into the present day

My God does not tell me I am a better person than any one of today's racists.  But My God does tell me, and often, that I have been wonderfully blessed by teachers and others who taught me the essential lessons of American and world history.

Thankfully, I am not alone in my perception that America needs to sing a new song, one that combines the beautiful in our spacious skies and their equally beautiful rainbows.

Composing and learning to sing this new song joyfully will not be easy.  But the effort to do so is well worth it.  For  as "W" himself did point us toward,  it is the "song of our better angels."