In October, the Quintanilla family told the Corpus Christi Convention & Visitors Bureau they would not authorize the festival in Corpus Christi in 2020. Herrman & Herrman, P.L.L.C. has said it would be the main sponsor for the event if it was moved to another city.

Eric Holguin, the company's brand ambassador, said Tuesday firm officials haven’t been in contact with the Quintanilla family recently regarding the event.

It’s a pearl of an idea.

Wild oysters already are harvested in a strictly regulated fishery in Texas. But beginning as early as the end of this year, these prized shellfish raised on saltwater farms in the Laguna Madre and elsewhere along the coast could begin hitting seafood stores.

Last year Texas became the final state on the Gulf of Mexico to legalize off-bottom oyster mariculture, a process which uses raised “beds” in shallow waters which oysters attach to, grow from, and eventually are plucked and processed.

Nationally, the farmed oyster business generates about $175 million annually. In Texas, it could quickly become a multi-million-dollar industry, too.

"Give all the power to the many, they will oppress the few"—Alexander Hamilton

Nearly 300 business leaders and residents of the Panhandle came together Wednesday morning for the Amarillo Economic Development Corporation’s second State of the Economy event in the Heritage Room of the Amarillo Civic Center Complex.

Kevin Carter, AEDC president and chief executive officer, presented statistics the corporation collected on the current state of Amarillo’s economy going into 2020. Carter said 2,300 new jobs were created within the city since mid-year 2017 and a 3% average increase in personal income growth is expected for residents in 2020. 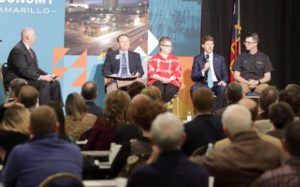 Isabel Cabanillas de la Torre was found shot to death on a sidewalk next to a bicycle early Saturday in downtown Juárez, the Chihuahua attorney general's office reported.

Cabanillas had stated on a past Facebook post that she used a bicycle as her mode of transportation.

The 26-year-old painter, clothing designer and women's rights activist had been reported missing by friends Saturday on social media posts after she didn't make it home.

The state prosecutor's unit dealing with women's murders said that investigators got a call at 3 a.m. Saturday that a woman was killed near the Mercado Juárez.

Perched high up in the leafy branches sit some of the most magical Texas tree house retreats with breathtaking views of the Hill Country countryside below.  If you want a whimsical, lofty escape far from the hectic hum of the city, we’ve found 10 Texas tree house rentals—from luxury hotels to affordable cabins.